Heading into the city on a fine Sunday night, I was in the mood for a classic night of dirty heavy rock at Cherry Bar.

When you are handed a free EP by the headline act as you walk in the door, you know that you're in for a good night. Even more so, it's a clear indication that BugGiRL love what they do and are willing to give up their hard earned to advance their cause. Personally, I think it's the best type of marketing and will certainly always go a long way to winning my attention.

The Convulsions took the stage first and warmed up the crowd with 30 minutes of thumping rock. With plenty of energy but no desire for theatrics, they provided a solid opener for the night. It was their covers, however, that provided the best, most sonic, moments of their set.

Between sets, Nelli Scarlet (lead singer of the second support, The Scarlets) was spotted limbering up with a few yoga stretches. This set my expectations for a performance full of rock-chick high kicks and bended-knee stage poses. However, I was disappointed to witness no such thing, as Nelli stayed relatively static. Whilst nothing special, I enjoyed their songs, such as Dirty Rock Baby and Your Face, as well as a cover Creedence Clearwater Revival's Proud Mary, but felt that their music was maybe lacking the stage performance it required.

There was a cheerful but reasonably sedate crowd, notching about 50 in number, as BugGirl took the stage. Beers in hand, the majority of the crowd gathered a few meters back from the stage.

Opening with Rock'n'Roll Hell, followed by Dirt in Skirt, it was full power all the way as BugGirl ripped out their no fuss rock with the highest energy level of the night. Their energy began to flow into the crowd and with beer(s) in hand, I was having a great time feeding off said energy and rocking along to the setlist. Their EP songs, such as title track Blood, Sweat & Beers and Motor City Lover, where highlights and just plain fun.

Whilst the song rocked, hearing V8 Motor live provided the most evidence that BugGirl really could do with a solid bass line to give it the oomph that song needs.

With local bands like The Cheats and The Fumes doing well with the Guitar/Drums concept, it's not the easiest style to pull off without the right synergy and voice. BugGirl are the first such act I have encountered with a female vocalist/guitarist...and not only can Amber hold her own against any such acts on the guitar...this girl can sing! However, being not quite as diverse as the aforementioned acts, BugGirl's pub rock would clearly benefit from the power and kick of a bass guitar.

Their sound and vocals clearly channels their classic rock heroes - Motley Crue, AC/DC, KISS – so if you're not a fan of such guitar rock, you're unlikely to become a BugGirl disciple.

They filled their set with a number of covers (maybe one too many), which clearly indicated their influences. First was the KISS anthem, Rock and Roll All Nite, a song which I specifically hate, primarily due to the excessive repetition of the one line chorus ("I wanna rock and roll all night and party every day...") but, thankfully, Buggirl's punked up version was much shorter and definitely bearable in the live setting of Cherry Bar. The next cover was the highly predictable but ultimately forgivable TNT from AC/DC - the coming week marked the first Melbourne AC/DC concerts in a decade...and being guitar rock band at Cherry Bar it would be impossible not to pay tribute, as per BugGirl's rendition.

The Angels' Am I Ever Gonna See Your Face Again was their final cover (and "the best one", according to drummer, Clinton). The song also ended their set, as they found themselves out-of-time in the noise-restricted bar.

Ultimately, BugGirl (and the supports) provided me with exactly what I wanted, a quality night of rock...and for FREE! I will be definitely be back for more from these acts.

Lastly, this night at Cherry was also a perfect example of why the local live music scene needs to be protected from ill conceived Liquor Licencing laws. There was not a moment of aggression caused by tonight's live/amplified music...just a happy crowd of considerate rock loving randoms. 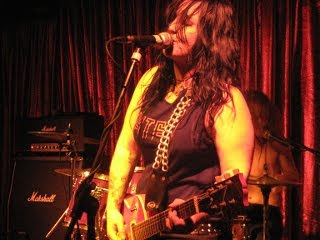 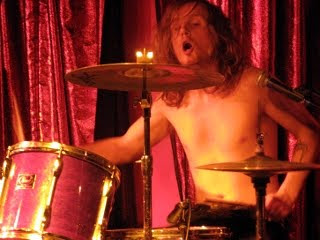 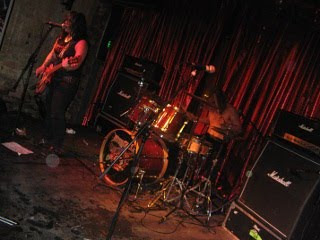