BrewDog Tokyo* is an amazing beer. This 18.2% abv Imperial Stout is finely crafted yet completely irreverent...true to form for Scotland's cheeky but accomplished craft brewery.

The brewery's description of Tokyo* is as follows - "A beer inspired by a 1980's space invaders arcade game played in Japan's capital. This imperial stout is brewed with copious amounts of speciality malts, jasmine and cranberries. After fermentation we then dry-hop this killer stout with a bucketload of our favourite hops before carefully ageing the beer on French toasted oak chips."

In a wonderful first for Australia, kegs of Tokyo* have been brought to our shores by BrewDog's Aussie importer, Hop & Spirit. These pricey kegs (I hear they cost something in the vicinity of $1000) are now being tapped at beer bars across Australia.

As Melbourne's weather cools down and clouds over significantly this weekend, the time is just right to slowly enjoy a big-ass warming beer like Tokyo*.

I first tried Tokyo* from the bottle last year. Whilst the flavour was incredible and I clearly recognised the amazing complexity and art of the beer, I found it rather harsh with the high alcohol burning my palate. It was enjoyable, but too much.

When revisiting Tokyo* in draught form, it was a much better experience. During a recent evening at The Local Taphouse, fellow beer blogger Aaron of I'm Here For The Hops shared his glass with me.

On tap, the jasmine and cranberries shine through in the brandy-like aroma. In the mouth, the alcohol is still in your face, but less harsh, much more balanced. The taste and mouthfeel imparts much depth and character of sweet dark fruits and roasted malts, plus something a little smokey. Oaky notes from the ageing are also more prominent in draught than the bottle.

If you enjoy stouts of any form, this is a beer worth experiencing...if only for the sheer provocation of it. James Watt and Martin Dickie of BrewDog have styled themselves as brewing punks. This beer certainly helps to confirm their claim.

I may be a little untimely with this post, as the very limited supplies of draught Tokyo* have been on tap around Melbourne beer bars for a week now...and are mostly likely almost empty, or close to it. Nonetheless, if you can find a bar still pouring, don't be afraid to take a chance on something that will set up back more than you've probably ever paid for a tap beer before (unless you were lucky enough to have some of the Moo Brew Aged Imperial Stout at Beer DeLuxe last year)!

If you are keen to try this beer and need to travel is get to any of these bars, I would try calling ahead to see if they still have it pouring. Then, scrape together all your pennies or grab some mates to share a glass with, because this huge beer is the perfect beer for sharing around. Enjoy! 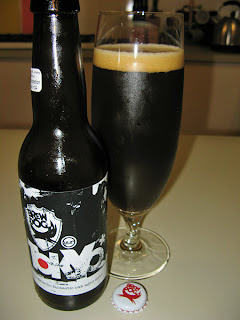 Learn more about BrewDog Tokyo* at:

Note: the * refers to the 18.2% abv version of BrewDog Tokyo, after this beer was originally brewed as a 12% Imperial Stout, which has now been retired.
at 2:49 PM