Late last year we noticed that Expatriate, a Sydney band that made something of a splash around Australia’s live music scene in 2007, would be playing an almost inconspicuous gig at the East Brunswick Club. Tickets were only $15 and we had good memories from the Expatriate gigs that we saw four years ago. So, we jumped on the opportunity to hit one more gig around the old suburbs in 2011. More importantly, we knew that it would sadly also be our last ever gig at East Brunswick Club. The venue, one of my top 5 live music rooms of recent years in Melbourne, has fallen victim to developers who will suck cultural life out of the place in favour of making a buck on building apartments (boo!).

Anyway…Expatriate gig…good band, good price and one last hoorah to a good venue…hence, we were excited to catch these synthy-pop-rock boys who had produced the excellent album In the Midst of This (an excellent soundtrack for running to!) then went quiet for so long.

So it's a shame the Expatriate set was a bit of an dud. More on that later though. 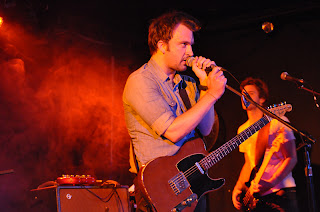 We arrived as first support, Them Swoops, were starting up. At first this local three piece had a very working class feel about them. They played a type of indie-pop-fuzz-rock with a splash of psych. Upbeat, they worked well as a young band, effortlessly in sync with each other and creating their own brand of sound. They happily announced and played their rhythm driven songs to an almost empty room. I suspect the only other people in the room besides us were staff or band members from the next support. Tracks included "Backflips", "Take Your Time" and "Work Around It". They also played a song called "White Rabbit", which was eerily appropriate as I drank a White Rabbit Dark Ale.

Them Swoop’s short final song was probably their best, as the rhythm guitar chords that dominated their set was replaced by a solid riff. Overall I thought they were a quality first support, but probably need to discover some type of X-factor to take their young band to the next level. Good set, Them Swoops!

Undercolours took us back to American high-school pop rock of the 80s for the second support. A collision of Bruce Springsteen, Bryan Adams, Air Supply, Journey, Cheap Trick and so on, along with the guitar effects of U2. Their set was like listening to the soundtrack to a 80s John Hughes film, which is fitting considering the guitarist looked like Emilio Estevez!

Undercolours were fun but in a novelty kind of way. They played well, but their sound was too familiar. I felt like this band been done before. There was also a slight air of cockiness to them, in contrast to the "we're just happy to play and have fun despite the empty room" vibe of Them Swoops.

The Undercolours novelty wore off on me quickly as every instrument began to sound like a cliché of the 80s Americana rock sound. That wave has passed for now.

The crowd had swelled in readiness for the main act, but it was far from capacity and the energy was quite restrained. Maybe it was the mid-December Thursday night factor, but few in the audience were willing to approach the front of stage position.

We first saw Expatriate support Something For Kate in 2006, followed by their own headlined gigs in 2007. Our Expatriate live highlight was one packed high energy night at The Corner Hotel.

Unlike those gigs of four years ago, Expatiate hit the stage and began this gig in very understated fashion and to somewhat restrained cheers and applause. It set the low tone of the gig.

The set was opened with new radio single "Miracle Mile" followed by unheard song "Do You Remember", which will feature on the band’s new album Hyper/Hearts that is due out in March. The unfamiliar track lulled the crowd a little.

The anticipated energy was reclaimed when the semi-epic, Cure-reminiscent, "Are You Awake", the lush final track on their In the Midst of This album, was a surprise third song. The excitement was back...but it was short lived.

Early on the band declared that they were underdone and not in their best form after a long break from playing together live...and it showed. This was their first gig back in Australia since relocating to Berlin over the past three years. Several stuff-ups were obvious and some songs seemed undercooked. The band's expressions during the show were very plain. They lacked the full sound and flamboyant energy of the past, which we had been anticipating to experience again. Maybe the lack of audience energy to feed off sullied the band. 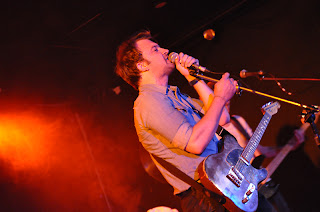 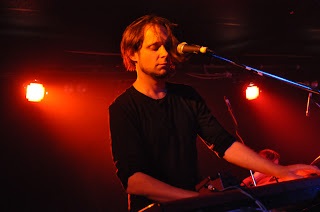 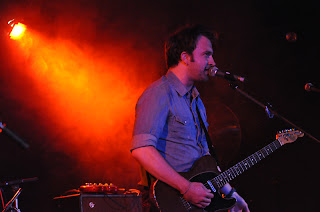 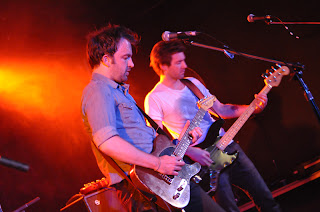 Thankfully David Molland did manage to pull off some classic bass rock-out poses... 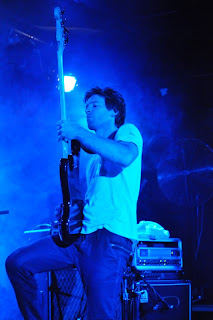 Next came several more new songs, which seemed more like band practice than a gig. Most of these new tracks seemed relatively slow and mellow for Expatriate and seemed to hinder the crowds desire to recall the songs and spirit of Expatriate circa-'07.

With the crowd holding back about two metres from the stage, lead singer Ben King’s former practice of spending much of the gig half inside the crowd was cut off. At times it seemed like he was weighing up whether to reach out into the audience or not. He never did, staying put on the stage. 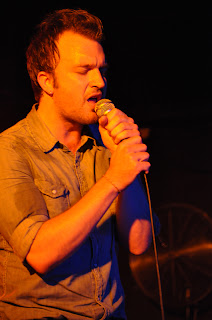 The atmosphere was lifted by hits "The Spaces Between" and "Crazy", but the levels were still far below former glory. The sound was much more raw than in the past, with the use of effects seemingly limited.

Despite the band's overall rusty showing, drummer Christo was on fire. He effortlessly drummed true and with flare. The man's fast hands and techno-driving beats showcased his pure skill. Christo must be one of the best young drummers in an indie Aussie band at the moment. I’d love to see a fast-hands drum-off between Christo and Nik Kaloper of The Jezabels. 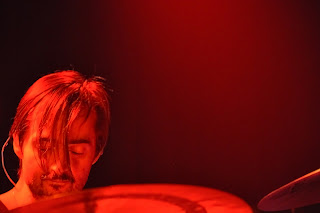 A song called "Design" finished the gig. The band gave a neutral "thanks" and departed.

There was a slow and weak call for an encore, which eventually built into a decent enough appeal for one more song. But Expatriate were done and no more to be seen. The lights stayed low and house music remained off for long enough to give the impression an encore was imminent, but when nothing eventuated the flat mood and slight disappointment of the night was only confounded.

Expatriate are a great band, a class act, but they were just off their game tonight. Back to the rehersal room, boys! There's polishing to be done.

Here’s hoping they are back in full force when the new albums hits the streets!

Don't just listen to my one view about this gig though. Other reviewers had a much more positive experience on this night and saw it quite differently to me. So, check out the reviews at:
There's also a good recent interview with Ben King on Mess & Noise at: